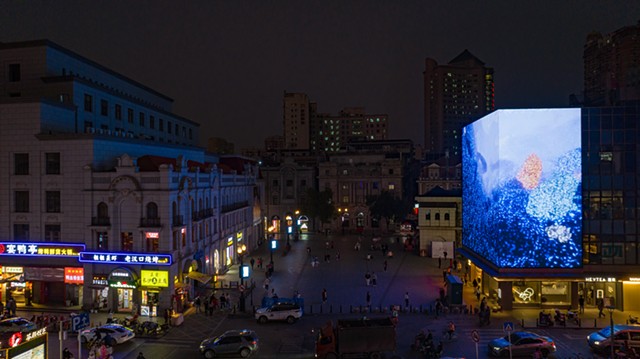 * Image: Submerged, Showing by Poly Art on LED Screen at Jianghan Road in the City Center of Wuhan, China, Nov 2022.

Working primarily with 3D software in a post-photographic framework, Fu creates scenes of experimental abstraction that translate the concept of liminality into the digital experience. The word liminal is often used to discuss the sublime within digital space and the VR experience, conjuring up notions of time, space, and perception, and echoing the experience of the sublime in nature. The term is borrowed from the field of anthropology, as anthropologist Victor Turner described as “the quality of ambiguity or disorientation that occurs in the middle stage of a rite of passage,” which “serves not only to identify the importance of in-between periods, but also to understand the human reactions to liminal experiences.” Fu’s work draws parallels between the physical, virtual, metaphysical, and multi-dimensional, setting the viewer in a liminal space at the threshold of each in what Turner called “a period of scrutiny for central values and axioms.” Digital space and the VR experience is what Turner would later make a distinction for as a liminoid experience, differing from the liminal in that the liminal engages in an experience out of our control, while the liminoid is a choice, often relating to play. Liminoid, then, is a simulation of the liminal, as the techno sublime experienced through digital space is a simulation of the sublime in nature. Within a digital space, we are offered an encounter to reflect on our response to the simultaneously beautiful and overwhelming artifice of the techno-sublime.